Fadwa’s story is one of many that go unseen in the media day in and day out. Fadwa goes to extreme lengths to gain the world's attention that otherwise would’ve been ignored. She stands in the middle of the street and sets herself on fire because she knows that such an extreme act will finally grab the world’s attention. Fadwa’s story illustrates the brokenness that exists between what truly matters and what the media picks up and makes headlines. More specifically Fadwa represents the woman that are oppressed and struggle to have a voice.

Persepolis censored in the U.S. ?

Persepolis has made the top ten of most frequently challenged novels all around the world for several years. Schools in the United States have removed this novel from their school literature due to “coarse language and scenes of torture” although many argue that it is nothing more than what students are learning about the Holocaust or slavery. Controversial in the Middle East, Persepolis did not face any removal in the United States until the Chicago school district abruptly pulled it from their libraries. The school district claims Persepolis contains graphic language and images that are not appropriate for general use. Satrapi has expressed disappointment on how such a story could be banned in the U.S. when the only country understandably to take this action is Iran.

“These are not photos of torture. [...] I don’t think American kids of seventh grade have not seen any signs of violence. Seventh-graders have brains and they see all kinds of things on cinema and the Internet. It’s a black and white drawing and I’m not showing something extremely horrible. That’s a false argument. They have to give a better explanation.”

Why does Persepolis matter to me?

The relationship Persepolis creates with God is one that I recognize in myself. Persepolis is standing up on her bed screaming at God to get out of her life. Currently I am stuck in my own spiritual journey and too often have been the young girl yelling at a higher power. They say that people either come closer to God after trauma or drift farther away; I drifted away. Just as Persepolis says, I was born with religion. I had nightly discussions with God and shared with him my big plans of becoming a devoted believer. After time this relationship started to fade much like Persepolis’s did. She is a character that has been incredibly relatable to me and I have recognized my own rebellious actions through her. 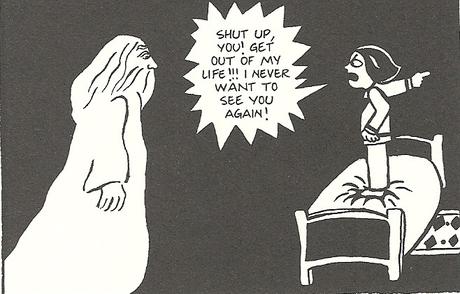